Chase McGrath, a senior Spartan, was named the 2017 STAR Student. McGrath, who follows a rigorous academic schedule, scored one of the highest SAT scores for one sitting in the school (1550). When he graduates, McGrath will have completed thirteen Advanced Placement (AP) courses as a dual enrollment student. He states he’s still uncertain of what college he wants to attend, but wants to major in physics with a minor in music.

As the STAR Student, McGrath chose Stephen Bengston, an AP US History teacher, as his STAR Teacher. “He has been a great influence on how I think about things.” said McGrath. “He’s a really good teacher in general.” 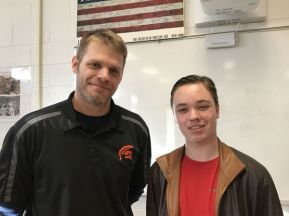 Bengston is impressed by McGrath’s many accomplishments

h and Principal Scott Hanson announced the news to Mr. Bengston in his classroom Wednesday morning.

“I’m very proud of Chase,” says Mr Bengston. “I’m honored that he believes that my class is so important that we’re able to connect in that way.”