At the Oracle we work on a two week news cycle, story ideas are due Monday, and most final stories are due the next Friday. For some shorter stories our authors will be given two stories to complete each week. An example of a two week piece would be Joiya Reid’s story on testing , and a one week piece would be Chandler Bryan’s Spring break story.

NS Oracle is hosted on WordPress.com, a blogging platform by Automattic utilized by The New York Times, CNN (News Room), Time, NBC (Olympics, Re/Code), AOL (TechCrunch), and ESPN (FiveThirtyEight). Using WordPress lets us worry about our stories and not the code for our website.

Monday – Story Ideas are due 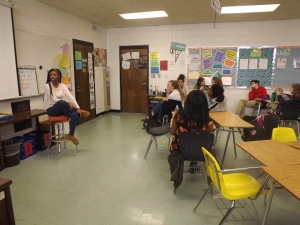 Every two weeks the authors are required to submit suggestions for stories for the Oracle to publish. Story ideas are due online before class starts on Monday. Authors present one story that they want to write and three alternatives. In class, the authors pitch their story ideas to the rest of the paper. As they present the rest of the staff is encouraged to add in any relevant information to help an author get started.
Dionna writes story ideas

After everyone has presented, the Editors in Chief, Seth Hochman and Dionna Green, decide who will write each story. When asked what she is looking for in story ideas, Green says she is looking for stories “that can relate to mostly the people of Sandy Springs, more specifically North Springs students, but we are always open to world news and a lot of variety.” This is exemplified by her favorite story idea, Elizabeth Wilkes’ Snowpocalypse coverage, “Very interesting. Getting to know what different students were doing at school, outside of school, how some were stuck on 400 and how they had to learn to survive for like two days without like food, and warmth. It was pretty cool.”

Tuesdays are in many ways the quietest day in the news schedule. Stories have just been issued and authors are beginning their research. When approached about his upcoming piece on historical headgear, Mckinley Powers said that this week his research is relatively straight forward: “It is something I am interested in so I already know most of what I need to know, and then I resort to usually trying to get at least three different sources, to get my stuff from.” He goes on to explain that how he approaches stories changes depending on the subject “And for something less serious like this, like when I am trying to do historical ones like when I was doing my Valentines one I wanted to get a few different stories because, you know there wasn’t just one Valentine.” Powers says that he generally won’t start actually writing his story until the second week, after he already has collected his information. 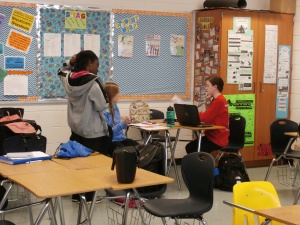 On of the biggest parts of Oracle that is not always obvious just by reading the site is how big of a part interviews play in our research process. I sat down with staff writer Rebecca Horn, to talk about her interview process.

Ari: So what story are you writing this week?

Rebecca: I am writing about the new landscape that FONS is building outside the front entrance.

A: So, do you need a lot of interviews for that?

R: Um, not too many. I have already emailed the person who is in charge of it. I am basically interviewing her, and then I will probably try to interview a couple of students to see what they think about the new construction.

A: What is the most difficult thing about collecting interviews?

R: Probably, just trying to find them, and, I don’t know because they could be anywhere in the school, and sometimes they are like busy so it is hard to get them at a good time

A: What do you do when it is difficult to track someone down?

R: Most of my interviews I do over email because it easer for people to answer, because they can like answer whenever it is convent for them, but I’ve probably… There is no specific article but just like just trying to get the administrators to answer is a little difficult, because I know like they are always busy with stuff.

Friday – Checkpoints and one week stories due 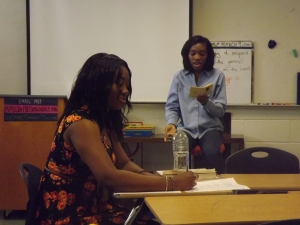 At the end of the first week authors are required to check in with the editors to ensue that they are on track to publish on time. “When I am looking for checkpoints I usually just look for wether there has been some progress, whether it is interview questions, or interview results or general facts, just to make sure kids are on progress with what they are doing so that when it comes to next wee, they are not really behind on what they are doing,” says editor in chief Seth Hochman. “I think of them as the outline or the rough draft for the entire story,” says staff writer, Princess-Zenita Jasper “[My] hardest story [for checkpoints] was probably my recent article I published about Ms.Pekatos A teacher that I interviewed… my checkpoint… was interview questions, but sometimes coming up with interview questions are harder than it seems.”
One week stories are also due today, authors are required to have their stories uploaded to WordPress and marked for review, so the editors can make finishing touches, and schedule a release.