Tension with the Ukraine all began with the split between citizens who face West toward Europe and those who to face East toward Russia. Last year, President Viktor Yanukovych decided to discard an European trade deal that promised rewards of cash offered by Russia. The declined trade deal left  some appalled Western Ukrainians who moved to the streets to voice their opinion. 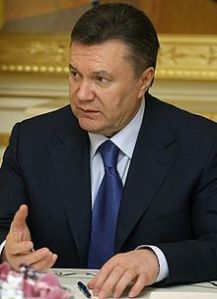 Ukraine and Russia have strong historical links along with a large number of ethnic Russians living in Ukraine, especially in Crimea and Eastern Ukraine. A majority of Ukrainians speak Russian on a daily basis and consider themselves more Russian than Ukrainian.

The central turn towards Russia set off protests by a pro-European crowd that climaxed in deadly confrontation with security forces. Protests had spread toward anti-government hostility, to extensive corruption and economic diminishment. Ukrainians had set up barricades in the middle of Kiev in an approach mindful of the Arab Spring. Occupants of Crimea were especially opposed to the pro-European government as majority of their population is composed of Russian speakers.

Protesters clash with police during a support EU integration rally in central Kiev.

Attempts were made to crush the protests and the police violently attacked protesters. A group of people died before a European brokered peace deal brought an end to the fighting, and Yanukovych fled Ukraine before the deal could be executed.

In the chaos that followed, soldiers that looked like Russians, but did not have the official Russian emblem, seized control of Crimea. From that time there has been a rigid stand-off between Ukrainian troops and Russians. Russia has been pushing for Crimea to join Russia and a poll has been set for March 16. Given the presence of Russian soldiers and the lack of time to prepare for the election, many doubt how legitimate the election will be.

Ukraine is truly on Russia’s doorstep, especially residing to the Russian’s Black Sea naval fleet. Ukraine used to be one of the republics in the Soviet Union, and Crimea used to belong to Russia. Ukraine and Russia are big trading partners, and Ukraine hosts part of Russian state-owned natural gas provider,Gazprom, network of pipelines.

Now, what happens next with this entire ordeal is still in the air. Pro-Russian forces continue to hold several government buildings, and lawmakers voted out a government which they saw as extremely pro-Kiev.Ukraine’s Parliament is said to be running Ukraine at the moment. Parliament have named a provisional president, began to establish a new government and call elections for May.